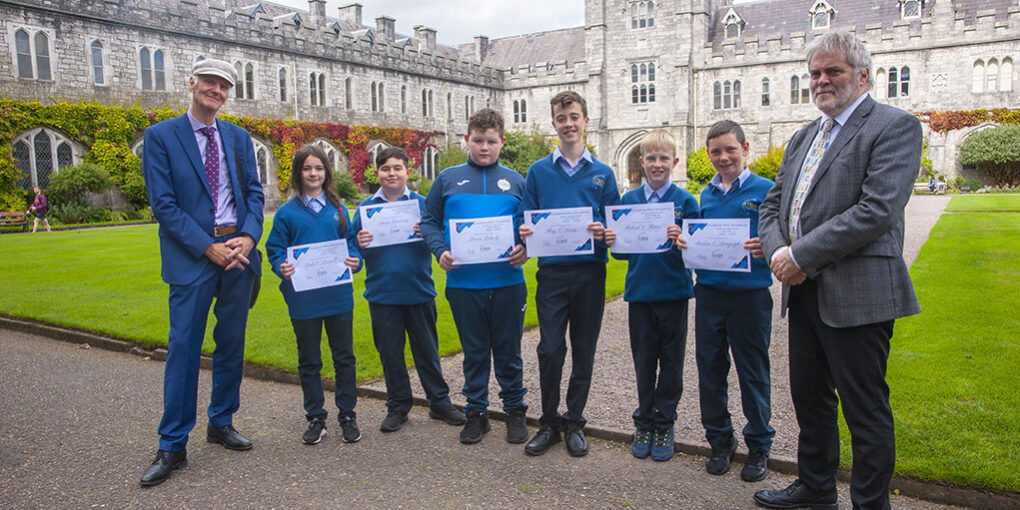 Gaelcholáiste Mhic Shuibhne is now in its fourth year of development and welcomed a new class of first years this September. The Gaelcholáiste is going from strength to strength and is proving a very popular option for students from the north side of Cork City who want to continue their post primary education through the medium of Irish. The students in Gaelcholáiste Mhic Shuibhne are enjoying pursuing their education through the medium of Irish.

The continued success of Gaelcholáiste Mhic Shuibhne is reflected in the high calibre of students attending the college. Parents are attracted by the high-quality education available through the medium of Irish, the wide subject choice and the small class size.

At a special ceremony to mark the awards on Wednesday 21st September, the students and their families were hosted by Professor Ó Macháin, and Head of Language Development, Mr. Seán Ó Broin. Professor Stephen Byrne, Deputy President and Registrar at UCC, presented the awards.

The collaboration between the Department of Modern Irish in UCC and Gaelcholáiste Mhic Shuibhne has been pivotal to the successful development of the Gaelcholáiste.

On behalf of UCC, Prof. Ó Macháin remarked: “UCC has been associated with this exceptional Gaelcholáiste since before it opened in 2019. We are very pleased to witness the high standard of teaching available to pupils and the tremendous progress that they make from year to year. With initiatives such as this we are developing important pathways through second level and on to third level, and that is of benefit to all”.

In responding to Prof Ó Macháin, Mr. Pat McKelvey, Director of Schools, Cork ETB, expressed his gratitude for the continued support and guidance of the Department of Modern Irish, UCC in this endeavour. In particular, he thanked Prof Ó Macháin for his personal commitment to the Gaelcholáiste. He wished the students of Gaelcholáiste Mhic Shuibhne every success in their studies and looked forward to the flourishing of the Gaelcholáiste in the years ahead.