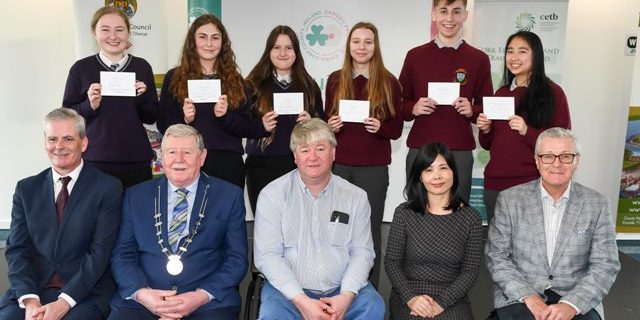 The competition, organised by Cork County Council in conjunction with Cork Education and Training Board (Cork ETB), Nanjing Municipal Education Bureau, and Jiangsu Foreign Affairs Office, received 21 team applications from secondary schools throughout Cork. Out of the 21 schools, 15 were selected based on video submissions to compete in the finals, where each school read a chosen poem about the Méihuā flower in Chinese, then in English, before delivering a performance based on the poem.
The Méihuā flower is the city flower of Nanjing, capital city of the Chinese Province of Jiangsu. Cork County Council first established friendship with the region in 2013 and went on to sign a Memorandum of Understanding with Jiangsu Province in 2016 to promote economic development, trade, tourism and arts and cultural exchanges for the mutual benefit of the citizens of both regions. An official agreement of friendship was subsequently signed in 2017.

The Méihuā Cup builds on the success of the Shamrock Cup English Language Competition, a Cork County Council funded initiative, delivered in collaboration with the Department of Foreign Affairs and Trade through the Irish Consulate in Shanghai, which has seen groups of winning students from China visit Cork for three consecutive years.

Deputy Mayor of the County of Cork, Cllr. Martin Coughlan, praised the competitors and noted:

“It’s wonderful to see young people from Cork furthering and strengthening the relationship between our two regions. The cultural exchange will be a fantastic experience for the winning students, and this contest speaks to the heart of the relationship between the two regions. Strengthening the cultural and economic ties between Nanjing and the Cork ultimately benefits the people in both regions.”

“Our long term success is strengthened by our ability to forge new relationships around the world. The Méihuā Cup Chinese Learning Competition gives young people an invaluable opportunity to connect with the wider world while strengthening ties between educational institutions in both Cork and Jiangsu, which will yield benefits in education, research and culture into the future.”