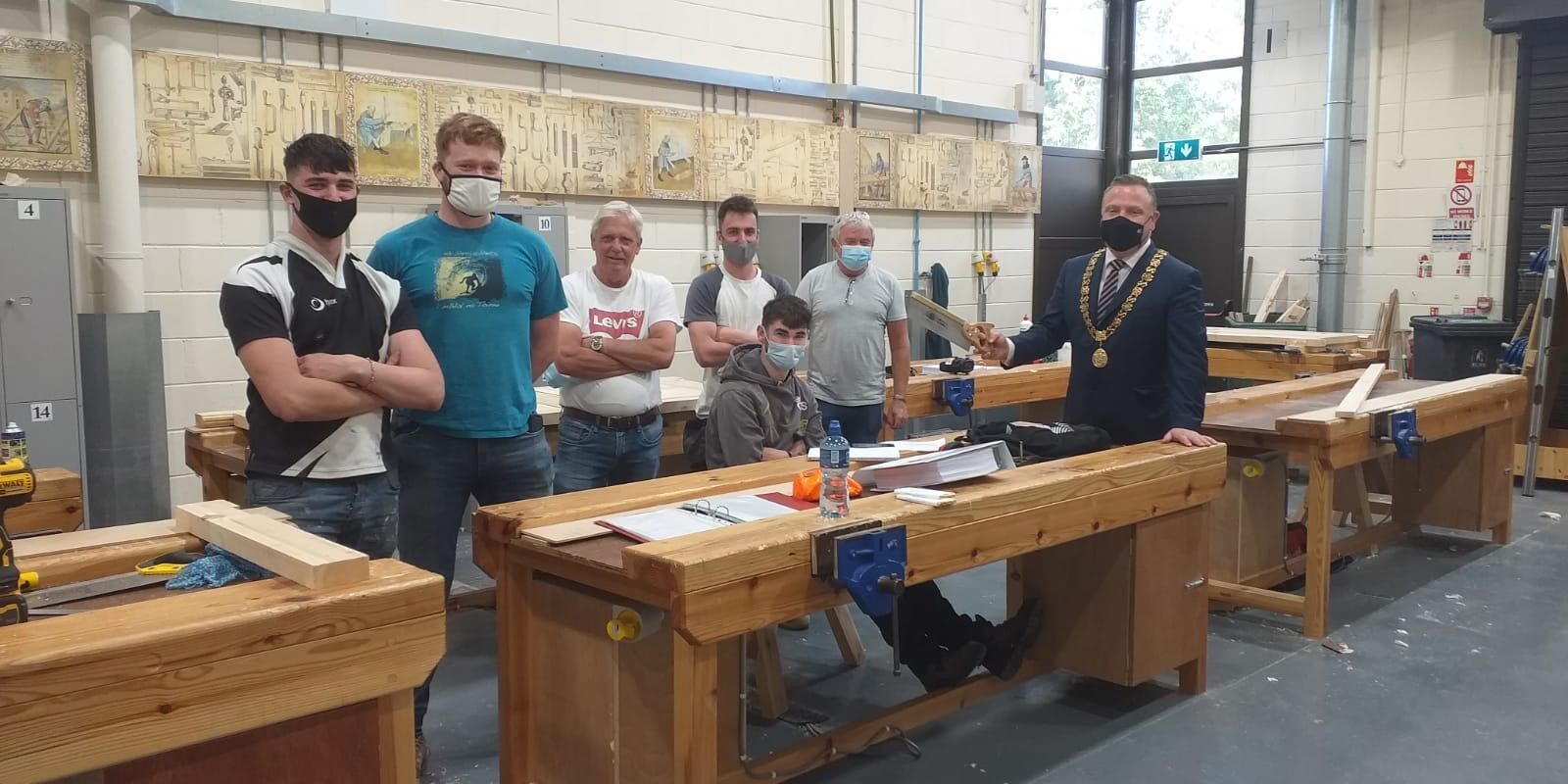 Lord Mayor of Cork City Cllr. Colm Kelleher might be known locally now for his political endeavours and accomplishments, but in a former life, the Fianna Fáil Councillor was a well-established carpenter across the city and county.

A former student of Coláiste Choilm, a Cork Education and Training Board school, the Lord Mayor said that the inspiration to embark on a career in carpentry came to him during his youth:

“My family have always been very business orientated and always worked for themselves, on both my mam and dad’s side, and I was heavily involved with my grandmother’s shop – she owned a furniture shop on Perry Street.

“That’s what led me to my passion for woodwork initially, I remember as a youngfella being told to assemble fabricated wardrobes, chests of drawers and beside lockers, and I remember being 11 or 12 and opening the boxes of furniture and thinking to myself, ‘someone else has had a hand in this before I assembled it’ – and I was fascinated. I had decided by my third year in secondary school that I was going to go in to carpentry.”

After completing his Leaving Certificate, Cllr. Kelleher then undertook an apprenticeship with his brother, who owned a carpentry business, while attending the Cork Training Centre, formerly FÁS, which operates under the remit of Cork Education and Training Board as one of their further education and training facilities.

The centre offers a diverse range of courses, supports and training, and is where many of Cork’s tradesmen and women complete traditional craft apprenticeships in a host of trades, such as metal fabrication, plumbing, carpentry and joinery, electrical, heavy vehicle mechanics, brick and stonelaying, motor mechanics, pipefitting and instrumentation.

The Apprenticeship Council  recently introduced a new range of consortia-led apprenticeships in a  wider range of sectors such as financial services, accounting, Sales , HR  and Cork Training Centre  deliver the  Commi Chef, Hairdressing, Butchery and  Auctioneering  apprenticeships . Full details of all apprenticeship programmes are available at www.apprenticeship.ie

Cllr. Kelleher said his role took him “all around Cork” and he subsequently went directly into business with his brother upon completion of his apprenticeship.

Unfortunately, similar to thousands of other apprentices across Ireland, the global economic recession had a substantial impact on his career.

“Like many apprentices in 2007 and 2008, when the recession hit, at the start of the year we were working across five sites in Cork. By the autumn we were down to working on one site, and by the end of the year, there were none, but this is where the love for carpentry came from.”

“I still have all the tools in the shed, and a coffee table that’s been unfinished for a long time, and a long time has turned in to a couple of years,” he laughs.

“Obviously I am no longer a carpenter- I’m the Lord Mayor, so, due to unforeseen circumstances my career took a different path, but it remains a passion of mine, and it always will,” he added.

Cllr. Kelleher welcomed a plan unveiled by Minister for Higher Education Simon Harris, T.D.  to secure 10,000 new apprentice registrations per year across a variety of trades and industries by 2025.

The commitment is part of the Programme for Government which details a specific Action Plan for Apprenticeships, which also sets out a number of other objectives which they plan to achieve by 2025, such as:

He said: “When I left school, apprenticeships and trades were a big, big part of society. Ireland in the past traditionally had a good history of apprenticeships – going right back to the 30’s, 40’s and 50’s – some trades no longer exist but there was always an emphasis on becoming an apprentice. It’s a great way to learn your trade and it’s a very exciting time in Ireland again because for the first time in a decade there’s going to a big emphasis on apprenticeship schemes again.”

“The economic downturn led a lot of people pursuing more academic routes as opposed to a trade and it’s unfortunate. I wouldn’t say we lost a generation but we certainly lost a certain cohort or age group of people who would have been capable and talented tradespeople and we lost a lot of people to emigration too, so this new, increased focus is very, very welcome.”

Cllr. Kelleher also said that the training he received while at Cork ETB’s training centre in Bishopstown proved greatly beneficial:

“I personally think the time I got in Cork ETB stood to me, because, everyone has their own perspective – but when you’re learning from there – you’re getting the correct perspective.”

He continued: “I know that some Leaving Certificate students might be looking at the CAO applications and thinking “I have to get this many points to get in here” but – an apprenticeship is a great alternative. It’s an opportunity to work hands on – on the ground – and learn as you’re constantly going – but you’ll come out with a job or be able to provide a service that for most people is essential – everyone needs houses, everyone needs a switch to turn on a lightbulb.”

“I would advise anyone that’s considering a more hands on approach to consider apprenticeship. The time I spent at Cork Training Centre was some of the best times of my life. I learned an enormous amount and I made lasting friendships. I’m happy to say one of them remains one of my closest friends. He owns his own building contract company in the UK now…