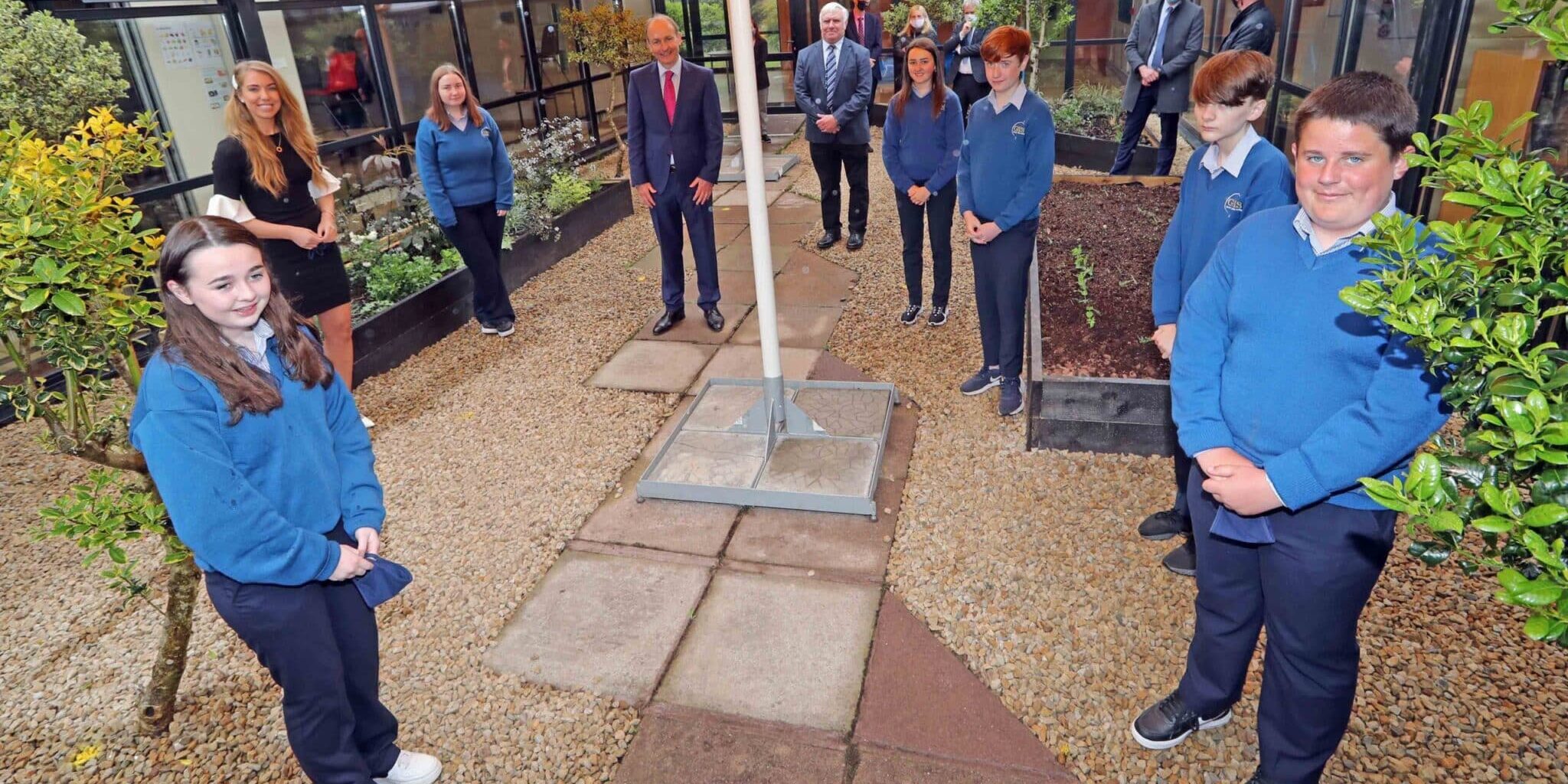 An Taoiseach Micheál Martin, T.D., joined staff and students at Terence MacSwiney Community College in Holyhill this afternoon to honour 12 second year students who were announced as winners of the prestigious Joe McDonagh award for Irish culture, heritage and language promotion in 2020.

This award celebrates Irish culture, Irish heritage and the Irish language, and second year students were honoured to win the award in 2020, using a collaborative online approach with their Irish teacher, Hilary O’ Connor whilst learning from home throughout April and May.

Twelve students worked diligently to create a project which highlighted the benefits of learning through Irish and what the language meant to them.

As part of their winning submission, students reflected on their learning journey, moving from an English-medium primary school to an Irish-medium post-primary school and used their digital skills to create a book using Book Creator and a short video using iMovie, with iPads proving extremely helpful as students met weekly outside of class time to work on the project.

The project also reflected on the many activities and events organised to promote the Irish language both in Gaelcholáiste Mhic Shuibhne, Terence MacSwiney Community College and with the wider community of Knocknaheeny.

Students then conducted a survey on attitudes towards the Irish language prior to the organisation of these events, and again towards the end of the year, reflected on the results and began to plan for the future.

An Taoiseach Micheal Martin, T.D., paid tribute to the students for their enthusiasm to create such an engaging project despite a challenging academic year.

He said: “I am delighted to be here at Terence MacSwiney Community College today to present the Joe McDonagh award to the winning students, whose diligent and innovative approach to the promotion of Irish culture and language during a challenging time was outstanding. I extend my sincere congratulations to them, in addition to their teachers and ETBI for their support.”

“We at Gaelcholáiste Mhic Shuibhne are very proud to receive the Joe MacDonagh Award from An Taoiseach for outstanding contributions to Irish medium education and culture. Our Aonad Lán Ghaeilge is only in its second year and we feel that we have already made great strides offering educational choice and inclusion on the Northside of Cork City.”

Chairman of Cork ETB and President of ETBI Cllr. Patrick Gerard Murphy also attended the ceremony and said the students had shown a clear passion to champion Irish language and culture:

He said: “I am delighted that Gaelcholáiste Mhic Suibhne has achieved this award and that as President of ETBI and Chair of Cork ETB I am here for the presentation. It demonstrates the interest and energy of our students. Their teachers deserve great credit for encouraging them to participate. ETBI appreciates how challenging it has been for schools this year and this school has shown great commitment to keeping things going for the students.

Also present at the event was Paddy Lavelle, General Secretary of Education & Training Boards Ireland. He also paid tribute to the students’ efforts.

He said: “I am delighted that ETBI has been able to support the development and growth of the Irish Language here. Gaelcholáiste Mhic Shuibhne has demonstrated the impact an enthusiastic group of students can have within their school and local community.”

Project submissions for the Joe McDonagh award were judged on the following criteria:

As winners, the school was awarded a commemorative plaque and financial support to be used for the further promotion of Irish culture, Irish heritage and/or Irish language within the school community.

An Taoiseach was also on hand at the school to unveil a commemorative plaque to former Lord Mayor of Cork Terence MacSwiney which was crafted by students from the school’s Woodwork Academy with materials supplied by Cork ETB.

The Academy was established by woodwork teacher, Stephen O’Sullivan, to foster the talents of exceptionally gifted students in carpentry.